2. Christopher Sainsbury - Winner Apra Art Music National Luminary Award (Individual) 2020, for his work in and through the Ngarra-burria First Peoples Composers program, which has impacted the Australian new music sector in 5 short years.

"It's an Indigenous-led change to the Australian classical and new music sectors that enriches us all."

Ngarra-burria means 'to listen to sing' in the Sydney language (Dharug/Eora). As a composer descending from the Indigenous people of the region of Sydney and the Central Coast (to the north), and as a previous Head of Dept at the Eora Centre I noted the need for a mechanism to support developing and emerging Australian Indigenous composers and to connect them to industry. This program is the result. We're not new, just previously unheard. See promo video Ngarra-burria 2022 (<< click to view). 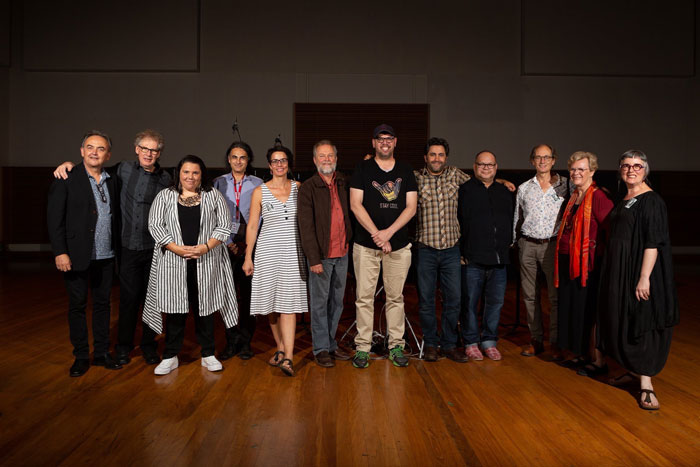 The composers and the partners

We started in 2015/2016. Current mentors include Jessica Wells, James Henry (previous participant composer) and myself. Participating composers include some of the best Indigenous musicians in the east - Troy Russell, Brenda Gifford, Elizabeth Sheppard, Rhyan Clapham (Dobby), Tim Gray, Nardi Simpson, Eric Avery, Will Kepa, Marlene Cummins, Mark Ross (Munk), Aaron Wyatt and James Henry. Others have participated for shorter time periods. In July we will be fielding for five new participant composers for the program. The music is varied in style, full of cultural expression, and engaging. Several of our composers are now receiving commissions from major ensembles and organisations including Ensemble Offspring, the Sydney Philharmonia Choirs, Sydney Living Museums, the Sydney Symphony Orchestra, various residencies and more. (See list below).

The major cultural partner and advisor is Moogahlin Performing Arts, Sydney. The program is based at the School of Music Australian National University Canberra, and other partners ensuring the success of the program include Ensemble Offspring, the Australian Music Centre, the Eora Centre (venue support), the ABC, and more recently the Royal Australian Navy Band.

See links for information and to hear sounds:

Ngarra-burria: New Music and the Search for An Australian Sound

Download the 2019 paper/book Ngarra-burria: New Music and the Search for an Australian Sound. This is from Currency House's Platform Paper series, and leads in rigorous debate around issues in the visual and performing arts in Australia. The focus is on Indigenous composers and their position in the Australian classical and new music scenes - being a position of reclaiming space from many non-Indigenous composers who had at times assumed Indigenous culture for their own purposes, and finding a platform to express current Indigenous narratives through new music and own the cultural agency in that. It is necessarily political, yet is respectful in tone towards all. See https://www.currency.com.au/bo...

The Ngarra-burria composer mentoring program and now the paper/book have proven to have had a major impact on our classical and new music industry: including our commissioners and funding agencies, our composers, concert programmers, broadcasters, performing arts and music organisations, major ensembles and choirs in Australia, music education in schools, musicologists, and more. Simply, Indigenous composers are now being commissioned, programmed, performed and broadcast, whereas previously apart from one or two they were not a concern of the industry, overlooked, not factored in and not fostered or developed. This signals that our industry has changed, being embracing of a welcome and relevant Indigenous-led cultural shift and re-calibration of music practice, and not just pertaining to one-off collaborations with Indigenous musicians. Many of our leading music organisations are now involved in long-term relationships with Indigenous composers. This is a turnaround. The industry now understands the previous abuses, its obligations to Indigenous composers now, and the cultural wealth for all in funding and programming Indigenous composers. There is still work to be done but the change is well underway. "It's more than a shift in style or sound, it's an Indigenous-led change to the Australian classical and new music sectors that enriches us all." (First Peoples Performing Arts Producer Fred Copperwaite). It's yielding some significant pieces.

Now, we as Indigenous composers determine our own narratives in concert. What themes are the Ngarra-burria composers exploring? Essentially new expressions of old cultures, also current political narratives, nature and relationship to land, Indigenous language reclamation, and just plain music for music sake! See the video and radio links, also the Australian Music Centre Echo education link. Yes, high school kids around the country are listening to and studying what these composers are doing! http://echo.australianmusiccentre.com.au/#lm-9

The Conversation article on Sainsbury’s paper published by Currency House Ngarra-burria New Music and the Search for an Australian Sound April 2019: https://theconversation.com/its-time-to-properly-acknowledge-and-celebrate-indigenous-composers-115839

Esteemed musicologist and concert reviewer/critic Professor Malcolm Gillies on Sainsbury’s Bark of the ‘bidgee premiere in May 2019. See Resonate magazine. This article includes commentary on the Ngarra-burria book: https://www.australianmusiccentre.com.au/article/christopher-sainsbury-bark-of-the-bidgee-2019

Ngarra-burria composers have recently been commissioned by such as:

* Songs of Home Exhibition - Sydney Living Museums with the Royal Australian Navy Band (Tim, Troy, Brenda, Nardi and Elizabeth). Winner of a major Museums And Galleries National Award MAGNA 2020. It's great for us to be an integral part of it!

The composers have received performances and broadcasts by more including:

Troy and Nardi have fulfilled times as Artists in Residence at the Sydney Conservatorium. See link https://www.sydney.edu.au/news-opinion/news/2021/09/22/indigenous-artists-in-residence.html

Ensemble Offspring and ABC Classic are currently recording an album that includes at least one piece by all of the composers that have come through the program thus far. Recording dates March 29 - 31, 2022.

There is interest now coming from international artists to commission and/or schedule various of the composers.

In July we will be fielding for five new participant composers for the program.